Henri de Castries, who is Vice-Chairman of Nestlé, a director of HSBC, and Chairman of Bilderberg’s Steering Committee, has spoken about Emmanual Macron’s first year in office.

In a report produced by the influential French think-tank the Institut Montaigne, of which he is the President, Henri de Castries declares that Macron has had “a strong start”, and that with Macron at its helm, “France is back on the international arena”.

“It’s good to have for the first time in years, a French president able to articulate a very deep and very structured European vision.”

In a further statement from the report, the Institut Montaigne says:

“The President’s pro-European agenda and his firmness on the aforementioned subjects, which both contrast strongly with the political instability prevailing elsewhere in Europe, have been unambiguous.”

Contributors to this report include the lawyer Nicolas Baverez, who is a director of the Institut Montaigne and a regular at Bilderberg (until recently he was on the group’s steering committee), and the CEO of the institute, Laurent Bigorgne, who attended the Bilderberg conference in 2015.

The relationship between Macron’s party En Marche, the Institut Montaigne and Bilderberg has always been intimate. At the very beginning of Macron’s rise to power,  En Marche was using Laurent Bigorgne’s private house as a contact address and his partner (Véronique Bolhuis) as a contact.

And Emmanuel Macron himself, a few years before becoming President, attended the 2014 Bilderberg conference in Copenhagen, back when he was Deputy Secretary General of the Presidency. Also attending that year were Nicolas Baverez and Monsieur de Castries.

It is also worth noting that among the Institut Montaigne’s impressive roster of Special Advisors, you can a number of Bilderberg conference alumni, including: Jean-Dominique Senard (2012, & ’13); Patrick Calvar (2015) and Dominique Moïsi (1999 & 2002).

Senard, who is the Vice-President and CEO of Michelin, also sits on the board of directors of the Institut Montaigne. Here is Senard, in January 2018, welcoming his young President to the Michelin factory: 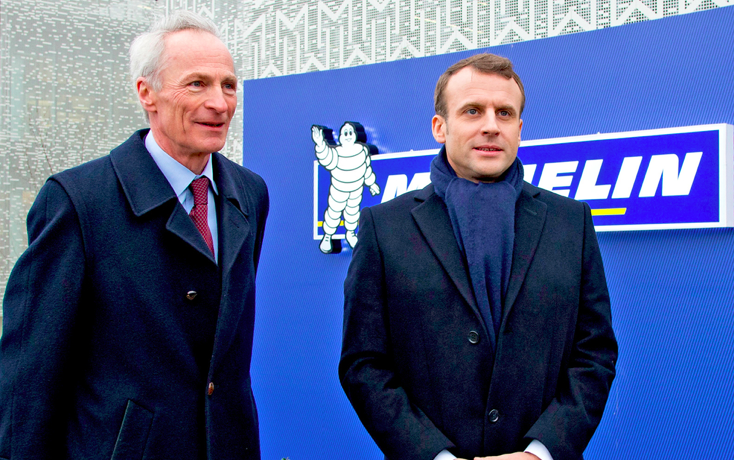 Historical note: the Institut Montaigne was founded in 2000 by Claude Bébéar, the head of insurance and finance giant AXA. This was the year that Henri de Castries, Bébéar’s protégé at AXA, took over the management of the company.

In 2015, in a similar passing of the baton, Henri de Castries took over from his mentor Bébéar as president the Institut Montaigne.

Bébéar was a supporter of Macron in the French presidential election. He said that it was the first time ever that he’d revealed his political leanings, and praised Macron for his pro-European vision.

One last thing: Claude Bébéar is also a Bilderberg alumnus. He attended the 1995 conference in Zurich. The ties between Bilderberg, AXA, the Institut Montaigne and Macron run deep.

If you are a member of the press, or plan to report on the 2019 Bilderberg conference, and would like any further information or assistance, please contact: press [at] bilderbergmeetings.co.uk

If you have any questions about coming along to report on the 2019 Bilderberg conference in Italy, please contact: info [at] bilderbergmeetings.co.uk

a guide to the international trade and policy summit